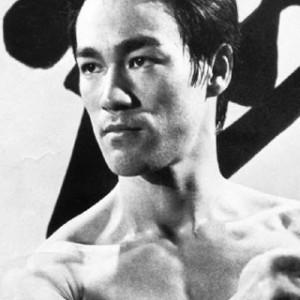 Bruce Lee was a Chinese American martial arts expert and movie star best known for films including Enter The Dragon and Game Of Death. Born on November 27, 1940 in San Francisco, he was the son of Can

tonese opera singer Lee Hoi-Chuen. Lee returned to Hong Kong at three months old and was raised in Kowloon, where as a child he appeared in several films. In his late teens he moved to the United States where he began teaching martial arts, eventually moving into films. Lee is widely credited with changing the perceptions of Asians in Hollywood movies, as well as founding the martial art of Jeet Kune Do. Lee died in Kowloon Tong on July 20, 1973 aged 32 from acute cerebral edema.

Show more
Show less
Arts
New documentary shows the vulnerable side of Bruce Lee
What can we expect in a new Bruce Lee documentary that we haven’t already seen in previous productions? By drawing on his own personal experience, Vietnamese-American director Bao Nguyen (Live from New York!), who lives between Los Angeles and Ho Chi Minh City in Vietnam, has delivered something fresh with Be Water, a personal take on the challenges the martial arts superstar faced as he lived between Hong Kong and America. Having gained the family’s permission, Nguyen benefited from unprecedented access to archival material, which was essential, as it is primarily a film told in the past.  Several of Lee’s old friends appear in interviews; hearing from his widow, Linda Lee Cadwell, and daug
Helen Barlow
• 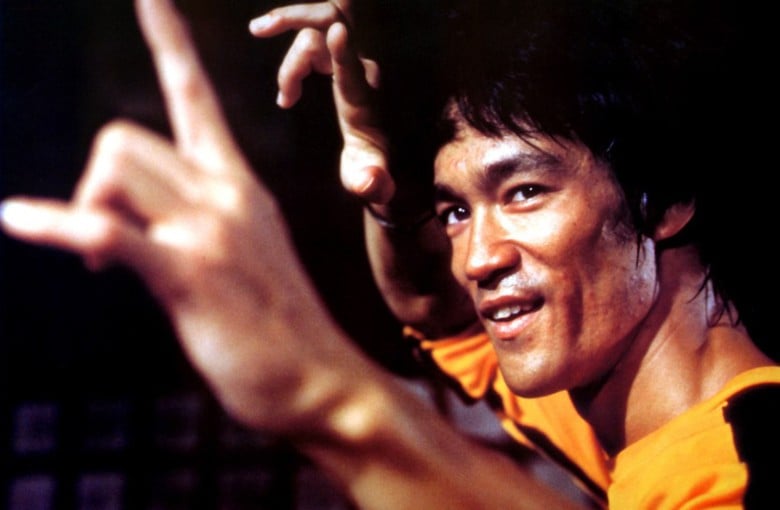 Business
Who’s that in the logo? Trademark case claims $30 million in damages
It is an image that is easy to find across China. A martial artist, wearing a yellow jumpsuit, is holding up his arms ready to attack or defend. You could be forgiven if you drove by and thought it was a picture of the kung fu star Bruce Lee. But technically, it is not. It is the logo of a famous Chinese fast-food chain called Real Kungfu.  The company has been using the logo for 15 years, but now it is facing a lawsuit from Bruce Lee’s family.  The lawsuit is the latest example in a series of trademark disputes between Chinese companies and international celebrities.  Bruce Lee Enterprises, run by Lee’s daughter Shannon Lee, is suing the restaurant chain for 210 million yuan ($30 million).
Viola Zhou
• 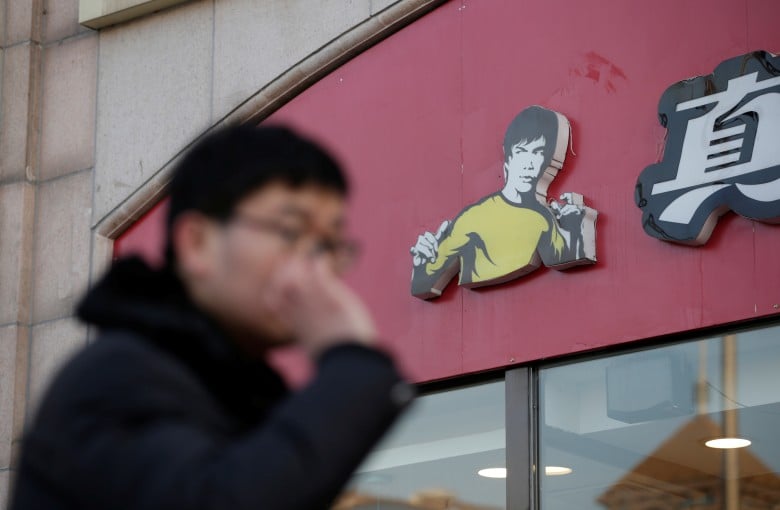 Arts
Chinese film fans upset by Bruce Lee-related film ‘ban’
When news spread that Quentin Tarantino’s Once Upon a Time in Hollywood was being pulled in China because of controversial scenes involving Bruce Lee, Chinese film fans reacted with collective disappointment, not support. Many Chinese netizens said they backed Tarantino’s freedom of artistic expression and hated to see another movie being “banned.” The film was due to be shown in mainland China on October 25. “Almost all the movies I planned to watch this year have been pulled,” read a popular comment on China’s Twitter-like Weibo. 2019 is a year of many political anniversaries in China, including the 70th anniversary of the founding of the People’s Republic. Film insiders say four major mo
Qin Chen
• 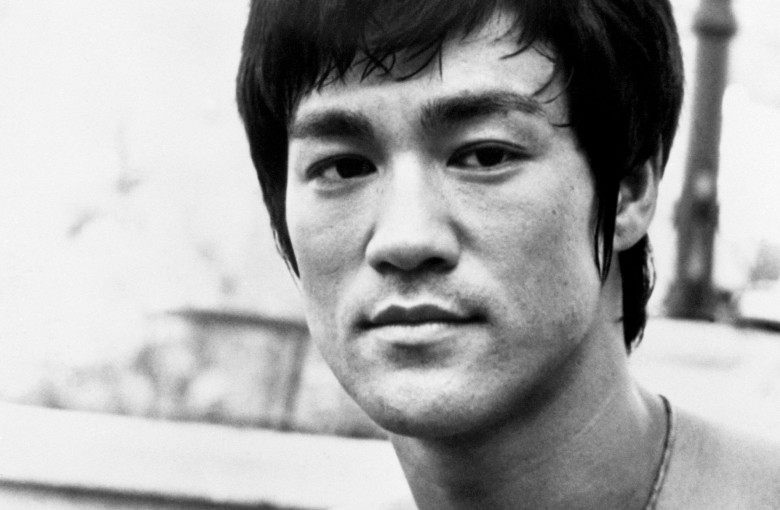 Sports
Is Bruce Lee the father of mixed martial arts?
Bruce Lee wasn't just an actor and kungfu master, he founded his own hybrid philosophy of martial arts called Jeet Kune Do. Tragically, Lee died in Hong Kong at the age of 32 from cerebral edema on July 20, 1973, the same year his film Enter the Dragon was released posthumously.  The action film would go on to become a smash box-office hit that sparked worldwide interest in martial arts.  Following Lee’s death, combat sports grew in popularity around the world. While most people credit the US with inventing mixed martial arts, a growing number of Lee's fans are supporting the claim that Bruce Lee is the true creator of MMA.
Karif Wat, Claudia Hinterseer, Adolfo Arranz, Dennis Wong, Pablo Robles and Sum Lok-kei
• 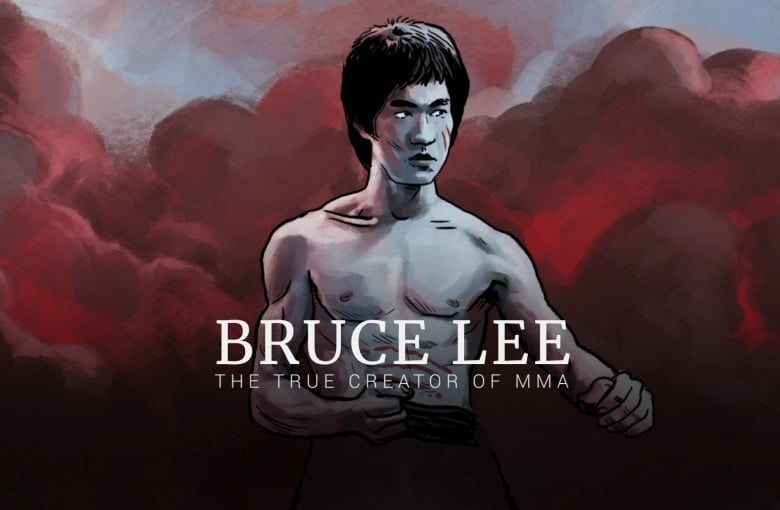 Arts
Drugs, sex and gambling: a tour of Bruce Lee’s San Francisco
Martial arts icon Bruce Lee was born in San Francisco’s Chinatown.  Now, thanks to his daughter, Shannon, and her producing partners, his long-fabled passion project, the TV series Warrior, set in his birthplace, has completed its first season.  In the show, our Bruce-esque protagonist, played by British actor Andrew Koji, is a young martial arts prodigy called Ah Sahm, who arrives from China in 1878. The series follows him as he looks for his estranged sister in San Francisco’s Chinatown – then a den of iniquity, specifically: opium, gambling and prostitution – and dealing with violence and racism. Warrior has been praised by critics and fans alike for its gritty realism and depiction of pe
Yuri Nagano
• 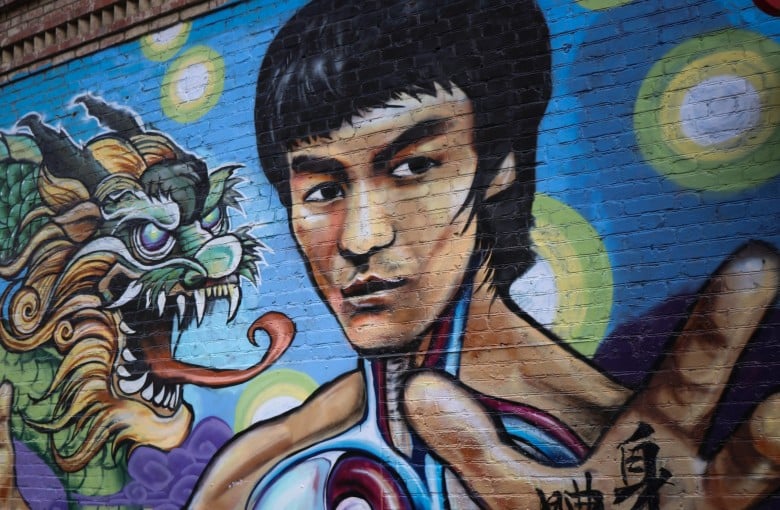 Arts
Bruce Lee’s last home is being demolished
The former Hong Kong mansion of Bruce Lee is now being torn down, despite calls from Lee’s fans to preserve the property known as “Crane’s Nest” as a museum.  The two-story, 5,700 square-foot townhouse, located in the upscale district of Kowloon Tong, was where the martial arts legend spent his final years. But it will soon be demolished to make way for a Chinese cultural studies center.  The demolition work kicked off on Tuesday. In the morning, the entrance to the compound was locked, while several construction workers worked around the main building, which was surrounded by bamboo scaffolds.  The owner of the property said the existing building had fallen into disrepair. But the decision
Viola Zhou
• 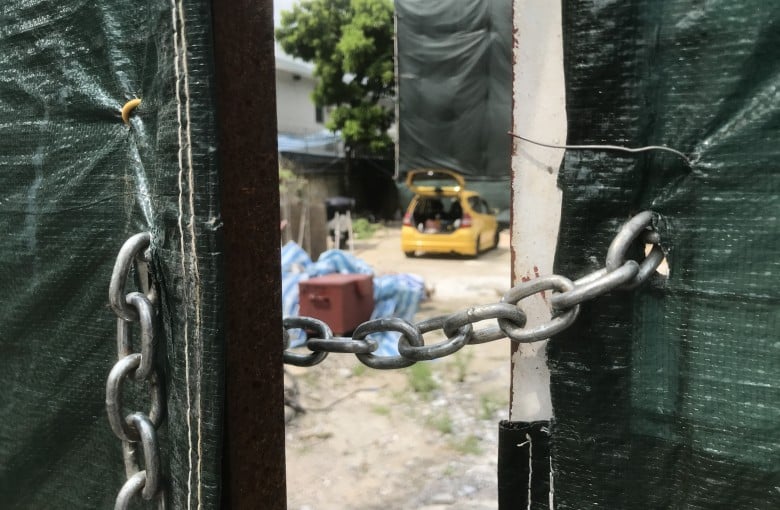 Sports
Another Chinese MMA fighter knocks out ‘fake’ kung fu master
Chinese mixed-martial arts fighter Xuan Wu has followed in the footsteps of his friend and fellow MMA fighter Xu Xiaodong by knocking out a “fake” kung fu master – in 12 seconds. Xu, 41, has made a name for himself in the past few years by winning bouts against self-proclaimed practitioners of kung fu, or Chinese martial arts, in high-profile matches. His challenge to old-school kung fu masters was interpreted in China as an act of defiance against traditional martial arts. This time, the challenger was a man called Tan Long. He said he was representing the wing chun style of fighting. He was dressed in a yellow jumpsuit similar to the one martial arts icon Bruce Lee wore in the film Game o
Nicolas Atkin
• 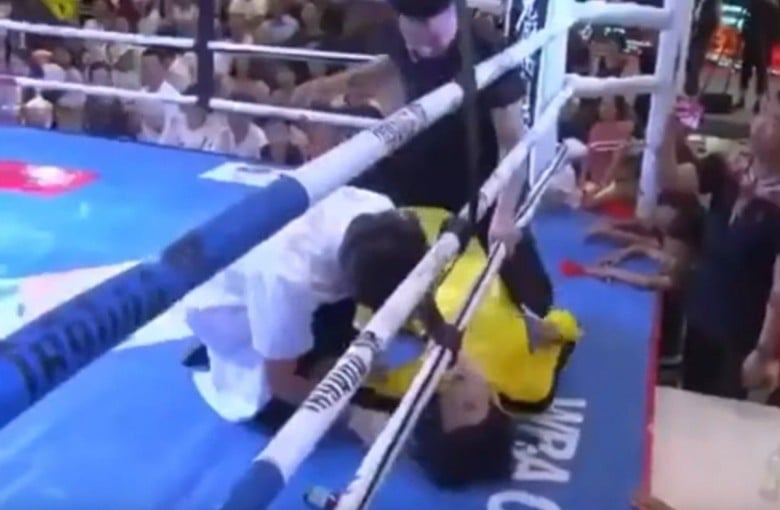 Arts
A Bruce Lee-inspired dance show
A modern dance drama inspired by Bruce Lee’s “be water” mantra is being staged in Hong Kong, his childhood home.  The Odyssey of Little Dragon, produced by the City Contemporary Dance Company, portrays Lee’s life in Hong Kong and the United States, the development of his kung fu philosophy, and the merging of his Eastern and Western identities. The performance is being staged from August 16 to 18, during a time of political unrest in Hong Kong.  For more than two months, anti-government protesters have been taking to the streets, often clashing violently with police.  For activists, Lee’s “be water” philosophy has become a key strategy guiding them to be nimble and flexible during confrontat
Arman Dzidzovic and Viola Zhou
• 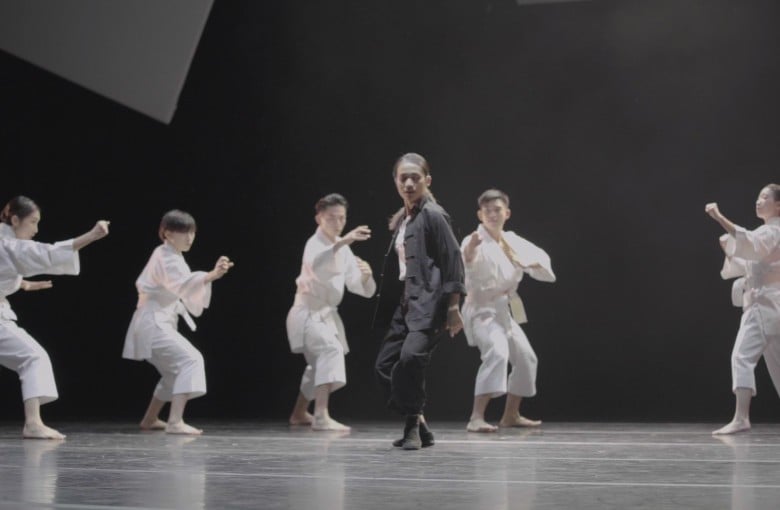 Society
Quentin Tarantino says Bruce Lee was ‘kind of arrogant’
Quentin Tarantino is defending his controversial depiction of Bruce Lee in the new film Once Upon a Time... in Hollywood. The film featured a scene in which Bruce Lee, played by actor Mike Moh, was challenged by Brad Pitt’s stuntman character to a two-out-of-three rounds fight. The fight didn’t produce a winner, but it was implied that Pitt’s character would have won.  “Bruce Lee was kind of an arrogant guy,” Tarantino said at the film’s Moscow press conference last week. “The way he was talking, I didn’t just make a lot of that up. I heard him say things like that to that effect.” Shannon Lee, the only daughter of Bruce Lee and Linda Lee Caldwell, said it was “disheartening” to see her fat
Nicolas Atkin
• 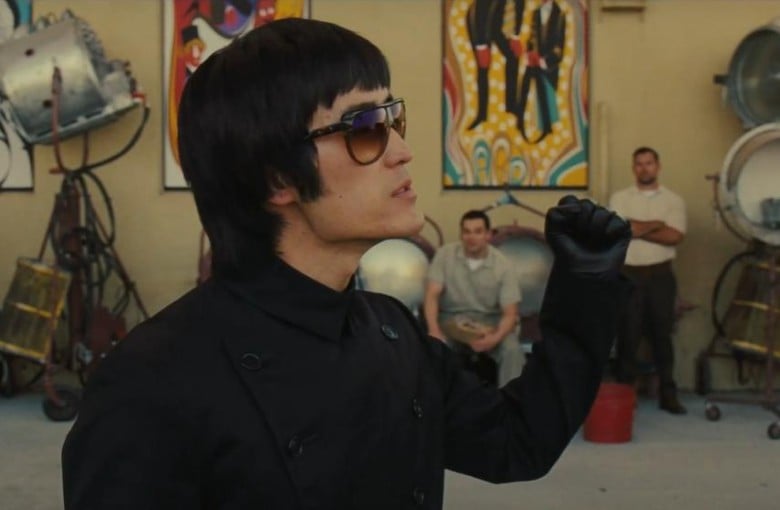 Politics
Be water: the Bruce Lee philosophy behind Hong Kong’s protests
A famed Bruce Lee philosophy has become a mantra for Hong Kong’s leaderless anti-government protests. “Be water” was once known only among fans of the kung fu superstar. Now the saying has been adopted by protesters to keep the police on their toes, as they demand accountability and democracy. For protesters, “be water” means being anonymous, spontaneous, flexible and also evasive – just like the flow of water.  The words are printed in English on protest posters, cited in online discussions and scrawled on walls as a reminder of the strategy. As a result, the site of protests can rapidly change over the course of a day and catch the police off guard. But the flash mob strategy could be put
Viola Zhou and Alan Wong
•