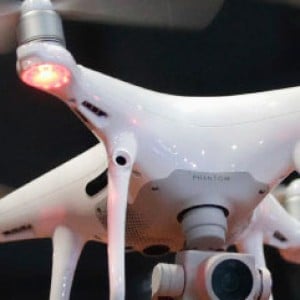 China
Shanghai’s New Year’s Eve drone show never happened
Chinese state media released video showing a spectacular “New Year’s Eve drone show” along Shanghai’s famous riverfront, the Bund. But while the video was dated December 31, 2019, spectators who were on the Bund at the time of the countdown to 2020 said there were no drones in sight. EHang, one of China's largest drone makers that managed the display, said the video was filmed earlier on December 28, 2019, for a show to be broadcast on a Shanghai TV station on New Year’s Eve.
Caroline Kwok
• 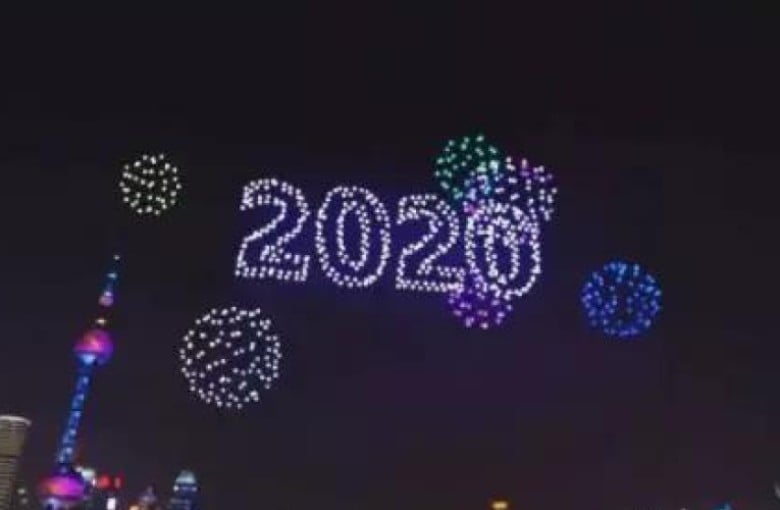 Tech
China’s farming drones
Agriculture is a crucial industry in China, employing over 300 million farmers and feeding a big chunk of the world’s population. But as China’s labor pool shrinks and urban migration continues apace, Chinese farmlands are facing a labor shortage. That’s where technology comes in. The Chinese government has set a target to produce 90% of its own farming equipment by 2020, and the agricultural industry is betting that the use of drones will boost productivity. XAG is one of the biggest drone makers in China. Watch our video, above, to see how farming drones might be the future of agriculture.
Lea Li
• Tech
Chinese pilotless flying taxi takes off
A Chinese firm has debuted a pilotless two-passenger flying drone. Developed by Chinese drone company Ehang and Austrian aeronautics company FACC, the Ehang 216 was tested in Vienna, Austria on April 4. The craft can reach speeds of up 80mph and fly for 40 minutes. The production model is expected to cost $224,000. Check out our video, above, for more.
Yuki Tsang
• 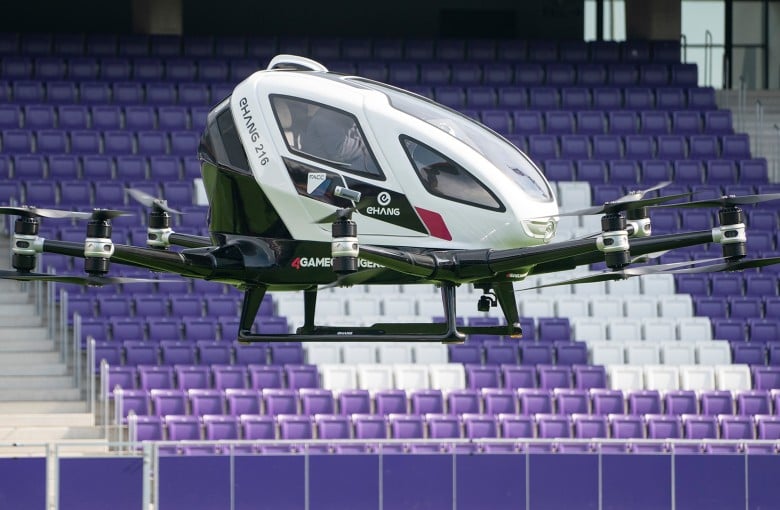 Opinion
Drones are even more annoying than selfie sticks
Forget the selfie stick, there is an even more irritating menace to modern travelers; one that has the power to ground flights, ruin holidays and make a persona non grata of its handler. Whether over a remote Thai beach or one of Sri Lanka’s national parks, the distinctive buzz of a drone will infuriate even the most happy-go-lucky of holiday-goers, eliciting expletives and making middle fingers stiffen as it hovers overhead. American space agency NASA has even studied what it calls “the annoyance generated by sUAS noise” – that’s “small Unmanned Aerial System” – concluding, unsurprisingly, that people find the sound of a drone rather irritating. On March 17, The Times of India reported tha
Mercedes Hutton
• 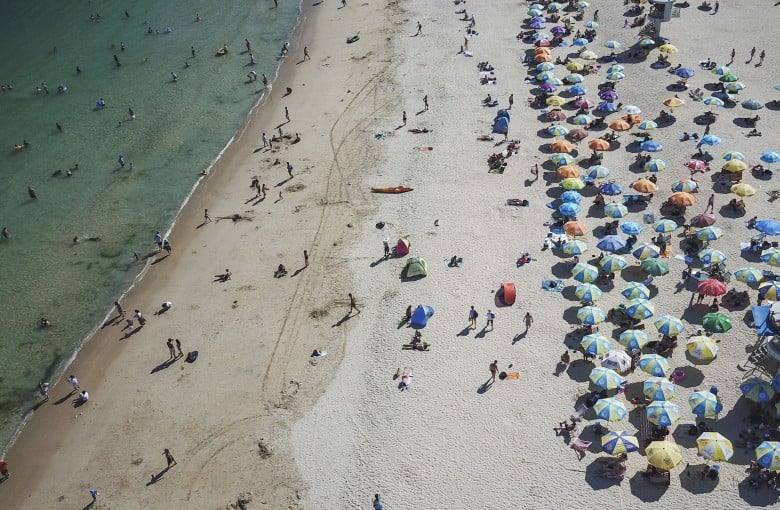 Society
China’s soaring market for drone-flying farmers
It’s been 10 years since he worked at a carmaker, and Zhu Beibei still remembers the acrid stench of rubber tires. Then 19, it was his first job out of technical school in Wuhan, central China. He was paid 900 yuan ($134) a month and there was a lot of overtime. He quit after six months. “I had to wake up at 2pm and work until at least 10am,” Zhu, now 29, told the South China Morning Post. “Every day I worked like a robot.” After he left, he bounced around various jobs, including selling farm produce, before a friend asked him if he had ever flown a drone. He had not, but after five days of training he became a certified drone pilot and joined a pesticide-spraying drone company. Today, Zhu
Celia Chen
• 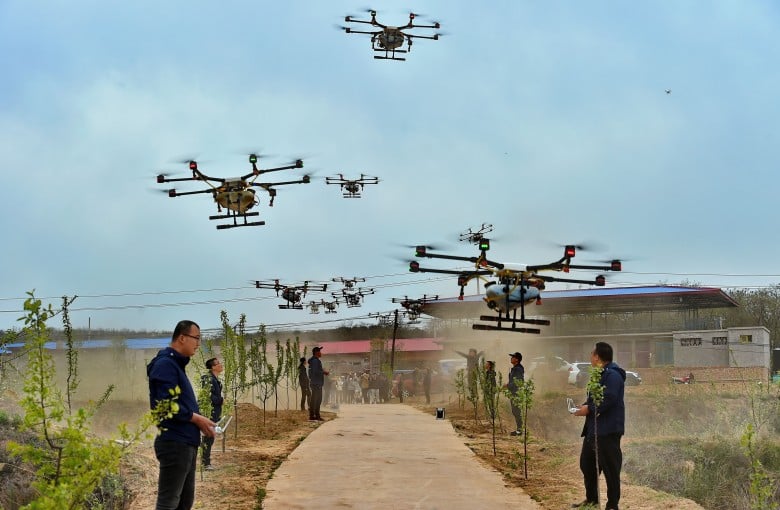 Tech
This is what it looks like when doves spy
If you’ve ever looked up to the sky and marveled at the graceful sweep of bird gliding above, be warned: it could be a Chinese drone monitoring your every move. The idea might seem far-fetched, but robotic birds are very much a reality, and China has been using them to surveil people across the country. Sources told the South China Morning Post that more than 30 military and government agencies have deployed the birdlike drones and related devices in at least five provinces in recent years. The “spy bird” program, code-named “Dove”, is being led by Song Bifeng, a professor at Northwestern Polytechnical University in Xian, capital of northwestern China’s Shaanxi province. Yang Wenqing, an as
Stephen Chen
• 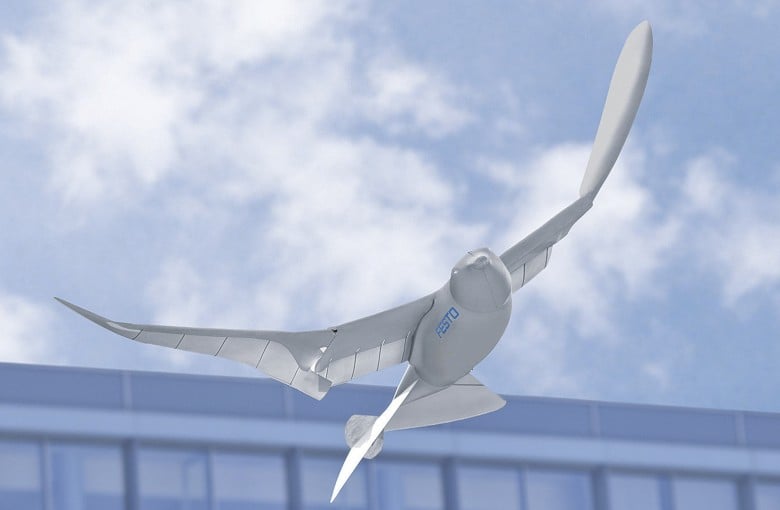 Tech
Food by drone launches in Shanghai
Online meal delivery platform Ele.me has launched a drone food delivery service in Shanghai. The service dramatically reduces delivery time, but currently is only available in the city’s Shanghai Jinshan Industrial Park, over a 22 square mile range. China’s online food delivery industry is huge. Last year food delivery apps in the country made $33 billion, with a user base of 343 million – more than the US population. Consequently demand for food couriers is high, but the job is dangerous and difficult. The introduction of drones is partly driven by the growing market, says Ma Longjia, future logistics project lead at Ele.me. “If meal orders grow past a certain level, it will be hard for us
Cena Lau
• 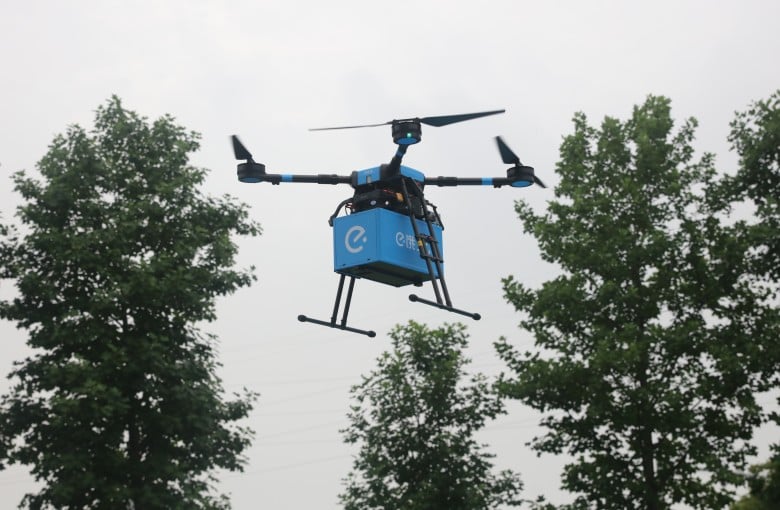 Tech
Drones and giant motorized wheels used to smuggle iPhones to China
Forget cigarette boats or rum-runners: all the best smuggling these days is done by drones. Authorities announced last Thursday that they have smashed a gang who used a system of drones, giant motorized wheels and cables to smuggle more than $79 million worth of mobile phones between Hong Kong and mainland China. Officials arrested 26 people in Shenzhen and three in Hong Kong, seizing two drones, two wheels and nearly 5,000 mobile phones. The gang, who authorities said had been operating for the past six months, used the drones to fly two 100-metre cables from two high-rise buildings in the border city of Shenzhen, to the roof of a village house in Hong Kong. The metropolis of Shenzhen sits
Clifford Lo
• 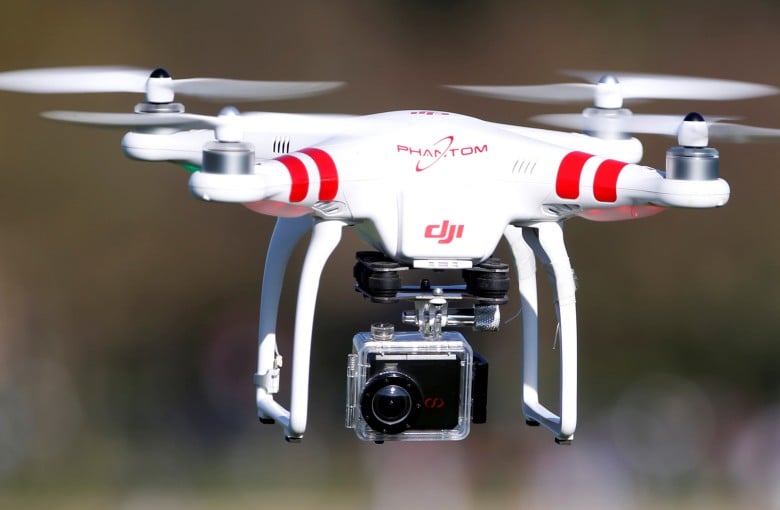