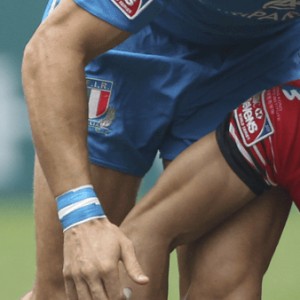 The Cathay Pacific/HSBC Hong Kong Sevens is one of the biggest sporting events in Hong Kong and the premier tournament on the World Rugby Sevens Series calendar. Taking place at Hong Kong Stadium, it

features the world’s best teams compete for the coveted title.

Show more
Show less
Sports
Partying with the president at the Hong Kong Sevens
The weekend saw Hong Kong’s flagship sporting event sweep into town. The city’s Rugby Sevens saw 40 teams from across the world compete in this fast-paced 7-a-side game. But as ever, most of the action was off the pitch – especially in the infamous South Stand of Hong Kong Stadium, where revelers dress up and drink all day – and maybe occasionally catch a bit of the rugby. The South China Morning Post’s photographers caught a glimpse of the action. Check out our gallery, above, for more.
Adam White
•

Sports
Costumes of the Hong Kong Rugby Sevens
Hong Kong’s three-day Rugby Sevens tournament drew to a close on Sunday evening, with Fiji beating Kenya 24-12 to mark a record fourth straight win – their 18th overall in the 43-year history of the tournament. “The Hong Kong Sevens is like the World Cup in Fiji and four years in a row is like winning the World Cup,” Fiji captain Jerry Tuwai told the South China Morning Post. The seven-a-side game is a fast, running-dominated version of the sport, and matches last just 14 minutes. But the rugby is only half of the reason to head to Hong Kong’s Queen Elizabeth Stadium. The other reason is the stadium’s South Stand – a raucous congregation of expatriates, locals and tourists who show up in ful
Adam White
•